Brooklyn-based indie string band Cricket Tell The Weather plucked its name from an old-time hoedown scene in a piece of instrumental theater when it first officially formed last year. Like others in the Northeastern old time scene, the band has roots in traditional bluegrass, but ventures into more contemporary arrangements in its self-titled debut (Amazon & Spotify) released in April. I’ve been listening to the album for the last few weeks and caught the band at last month’s Brooklyn Bluegrass Bash. With strong songwriting and instrumentation from Andrea Asprelli (fiddle), Jason Borisoff (guitar), Doug Goldstein (banjo), Dan Tressler (mandolin) and its two bassists and Jeff Picker & Hans Bilger, the band represents one of the most exciting crews of younger folks in the New York bluegrass scene right now.

I shot a few questions over to Andrea and Doug in advance of their shows this coming weekend at the Hudson Valley Bluegrass Association Showcase on Friday, Nov 21, and Rockwood (Stage 3) on Saturday, Nov 22. Check out a few videos of the band and as well as a few photos from their performance at the Brooklyn Bluegrass Bash by music photographer Jacob Blickenstaff (shared courtesy of the Bash). 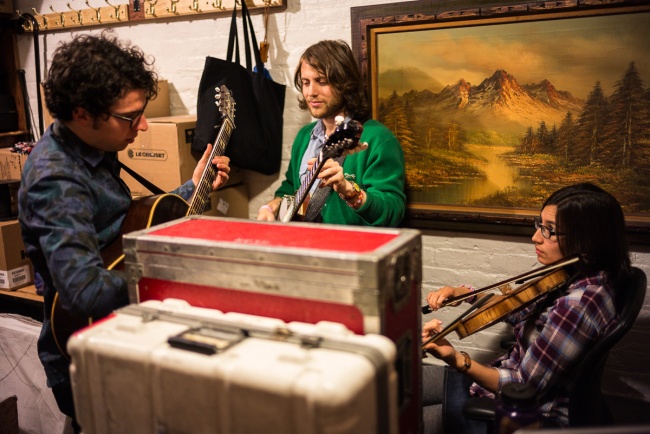 How did Cricket Tell the Weather come together?

The band met through bluegrass festivals and jams in MA, CT, and NY. Festivals are an easy place to meet players from all around the region, but it took a few years of searching to find the right lineup to get the project going. Now the whole band is based out of Brooklyn.

Andrea and Jason have been called out for their great songwriting? Are you writing together or individually?

Andrea: We seem to be the kind of writers where lyrical ideas tend to come easier when we can focus on our own. The lyrics, melody, and basic structure of the songs are usually written before the song is brought to the band. Once the songwriter brings it to the band all the members contribute to the arrangement and try to build the musical textures and dynamics around the idea of the song.

“Salt & Bones” is one of my favorites. What’s the backstory on that one?

Andrea: I was finishing up an AmeriCorps program in Connecticut and began writing the song after reflecting on the whole experience with a few members of my class. The friendships I made with people in the program were inspiring to me. Everyone came from different cultural, racial, and economic backgrounds and it was transformational to me to see how supportive everyone was and how willing people were to put themselves out there and tell their stories. The lines ‘my friend take comfort tell me what you see / place my eyes in you and yours in me’ speak to this experience. The lines ‘write me a letter or sing me a song / paint me a picture of what came along / just to make me feel I’m not alone’ are a reflection on the role I think art plays in building these connections and the importance of communicating our experiences to each other.”

Anything exciting coming up?

Doug: We have plans to record our next album in the Spring. We’re focused on songwriting and original material, so for now we’re getting that honed to where we like it. We’re excited for this next year – to keep growing as a band, get new material out there, and start getting out west and further south.

What’s going on with Doug’s banjo?

Doug: It’s a new kind of banjo I invented that has an extra-low string and a headstock extension for that low string (like on Paul Kowert’s bass). It’s funny that the instrument now has both a short-string, a long string, and extensions going in both directions. It allows me to defy the range limitations of an ordinary 5-string banjo setup.