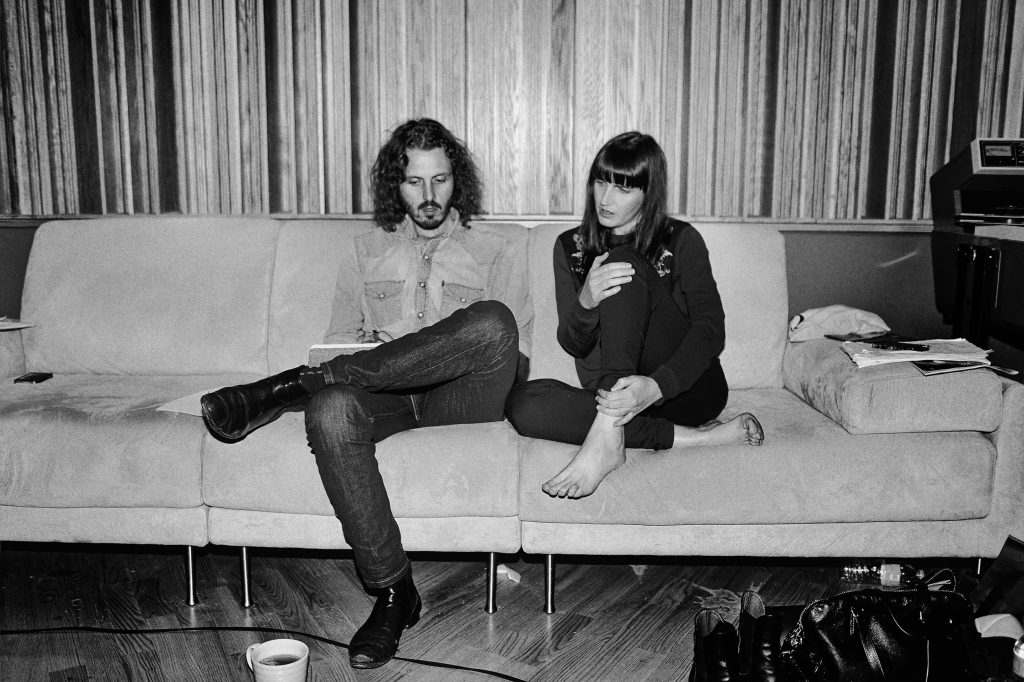 I first met Melinda Kerwin and Simon Rudston-Brown two and a half years ago while on a stint in their hometown of Sydney. The folk pop duo, which was then performing under the banner of The Falls and now just Falls (no “the”), were days away from their first US Tour and SXSW appearance. After a long running Wednesday night residency at the Hollywood Hotel in Surry Hills, and multiple tours around Australia with big visiting US and European acts, the band that was once a couple (and now isn’t) had built a good following in Australia for an indie band, where its especially hard to gain steam without a lot of radio time. But it wasn’t until that trip that the duo’s perfect Civil Wars-esque harmonies caught the ear of American fans or label executives.

And that led to last week’s release of Falls’ Verve Records debut, Omaha (Amazon & Spotify) – an album that feels more like two records than one. With a vibe that starts off feeling radio pop (and we can expect songs like “When We Were Young” to get some radio love), Omaha shifts to an Americana sound starting at the eighth track, “Independence Day.” While the duo’s honest storytelling is consistent throughout, and it’s definitely still pop, the synthesizers that are heard in the first half of the album are replaced in the second half by pedal steel and acoustic guitars – a sound mostly influenced by their time on the road in the US. “Better Go My Way” and “Argentina” are my favorites.

I caught up with Falls over a few beers after their show at Rockwood a few weeks back. Here’s a conversation I had with Melinda…

gcb: When we first met in Sydney in 2013, you were about to head to the US for your first tour. Did you ever expect that you’d get signed so quickly?
Kerwin: We honestly went to America that first time with no expectations. At that time we were unsigned, unmanaged, uneverything-ed, so we were surprised when we were invited to showcase at SXSW. We really did feel like it was the opportunity of a lifetime and that we’d always regret it if we didn’t go, so we spent all our savings on that trip and went and gave it our best shot! We worked hard to play the best shows we could, and just waited to see what happened. I cold emailed people we had dreamed of working with but honestly didn’t think anyone would come to see us play, but then they did. In the few short weeks we were here, we met our lawyer, our manager and on the day before we flew home, we signed with our US booking agent. I still can’t believe how quick things happened recounting it now.

Do you agree that this is really two albums in one?
We’ve always found that we write a lot of different kinds of songs…when we recorded our first EP we tried to keep it pretty tight stylistically as it was only six songs. With the album we felt like we wanted to be a little braver and show a broader range of who we are as songwriters. Our biggest reference for the kind of record we wanted to make was Fleetwood Mac – they have their stripped back songs like ‘Landslide’ and ‘Never Going Back Again’ and then have their bigger pop-ier band songs like ‘Rhiannon’, ‘Dreams’ and ‘Don’t Stop’. We liked the range they show on their records and hoped to do the same.

When it came time to sequence the track listing we did so with vinyl in mind, so our record really does have two sides. The first half definitely leans more towards indie folk rock/pop (with the last song being ‘Someone Like You’), then we settle into our Americana roots in the second half and with the bonus tracks. We didn’t really plan it that way, but we felt that the songs flowed best in that order.

How has your time in the US influenced the new album (besides the name)? What were the biggest influences?
We wrote almost all of the songs on the record during our first 12 months here while we were on the road. On the simplest level I think you can see the influence the landscapes had on us in a lot of the visual imagery referenced, but thematically things delve a little deeper. The most literal reference to America on the record is ‘Independence Day’ which we wrote on our first 4th of July here last year, but I think the biggest influence on our writing was the fact that we were so far from home and the feelings that brought with it. There is a definite undercurrent of longing that runs through the whole record.

Any chance we will see some pedal steel integrated into your live performances?
We certainly hope so!! We really can’t wait to tour these songs with a band!! At the moment we play most of our shows just two of us and a guitar, the way the songs were written, but we would love to play the with the whole band (the way the songs were recorded) and really hear the songs come to life live! We have a big band though – us, bass, drums, keys and string quartet and often some guest players like pedal steel, flugal horn or harmonica– so it might be little while yet before we do our first band show out here!

What’s it like being on the road alone with your ex for so long?
It’s an important question as our dynamic really informs our writing. Touring in America is completely different than touring in Australia, and this was the first time since we broke up, that we were spending literally 24 hours a day together. While we have our moments, I think it was the best thing that’s ever happened to us. It made us realize that we really are a good team and that we can do this. It really did bring us closer together so we are now like family. We definitely fight like we are! But it’s a good thing, because now we know that even when things get tough, neither one of us is going anywhere.