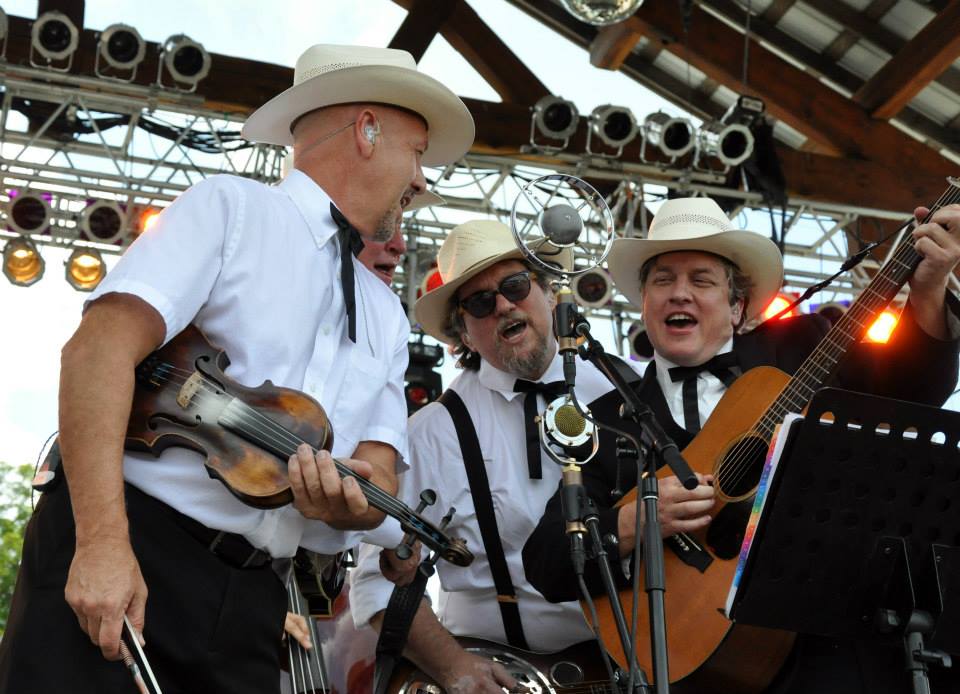 The Earls of Leicester – Photo by Russ Helgren

During the Earls of Leicester set on Sunday afternoon at FloydFest, Jerry Douglas was as blunt as he could be with a crowd of diehard bluegrass fans.

Douglas said “if you really want to geek the fuck out about it,” referring to the years of material the band was covering from Flatt and Scruggs.

And the masses were there to do exactly that — geek out. The festival, labeled as Fire on the Mountain, was a bluegrass geeks convention and Douglas was the master of ceremonies.

FloydFest is held in Floyd, Virginia and is nestled just off The Crooked Road, a more than 300 mile driving trail that is a historic trove of Appalachian porch music. The path winds through the mountain pastures of Southwest Virginia and connects various official old time venues with mountain folk’s front porches that still hold nightly jams.

FloydFest was filled with the faded fiddles and the foot stomping that created The Crooked Road.

While heritage was aplenty at this year’s festival, the weekend kicked off with two men responsible with spinning bluegrass into the future. Newgrass pioneers Jeff Austin and Sam Bush kicked off Thursday night with grassy sets, leaving the grass damp enough for Leftover Salmon to plug their amps.

Thursday night ended with Keller Williams playing bluegrass versions of Grateful Dead songs with Reed Mathis, Jay Staring, Andy Thorn and Jeff Austin. It was surely not a night for bluegrass traditionalists but rather a showcase of the newgrass world.

While bluegrass was king on Thursday, folk music took the helm on Friday.

Carlile stole the crowd’s heart with painful stories of heartbreak, coping with loss and even self transition through religion. The folk singer from Washington seemed to draw the biggest crowd of the weekend and had every single soul watching closely as she told intimate story after story to accompany her songs.

Saturday’s song saw a shift toward the more progressive of roots music. Eclectic folk rockers The Oh Hellos and bluegrass/folk rockers Trampled by Turtles gave the crowd a taste of modern roots music.

One of bluegrass’s fastest flatpickers on six string was a smooth transition before one of the more popular modern bluegrass bands in Greensky Bluegrass.

Greensky took festival attendees on a nose dive back into traditional bluegrass, while still making some valiant climbs into the clouds of today’s progressive bluegrass.

As folk and bluegrass fans had been marinating in a wide range of music, stemming from tradition bluegrass flavors to more progressive picking, Sunday was a day for the festival to come full circle and discover the music that was forged from The Crooked Road.

Douglas went from his Earls of Leicester set to sit in with bluegrass royalty and piller Peter Rowan on the Ferrum Workshop Porch, which was reminiscent of the front porches filling The Crooked Road, where so much of this music’s earlier forms in old time music got its beginning.

The set was filled with stories of Rowan’s beginning in bluegrass as a Bluegrass Boy with Bill Monroe, the father of bluegrass. The two also spoke of their early days touring together in Europe. It was a history lesson from two sure to have their doctorate in the roots of bluegrass music. It belonged right on that mountain, nestled right off The Crooked Road.