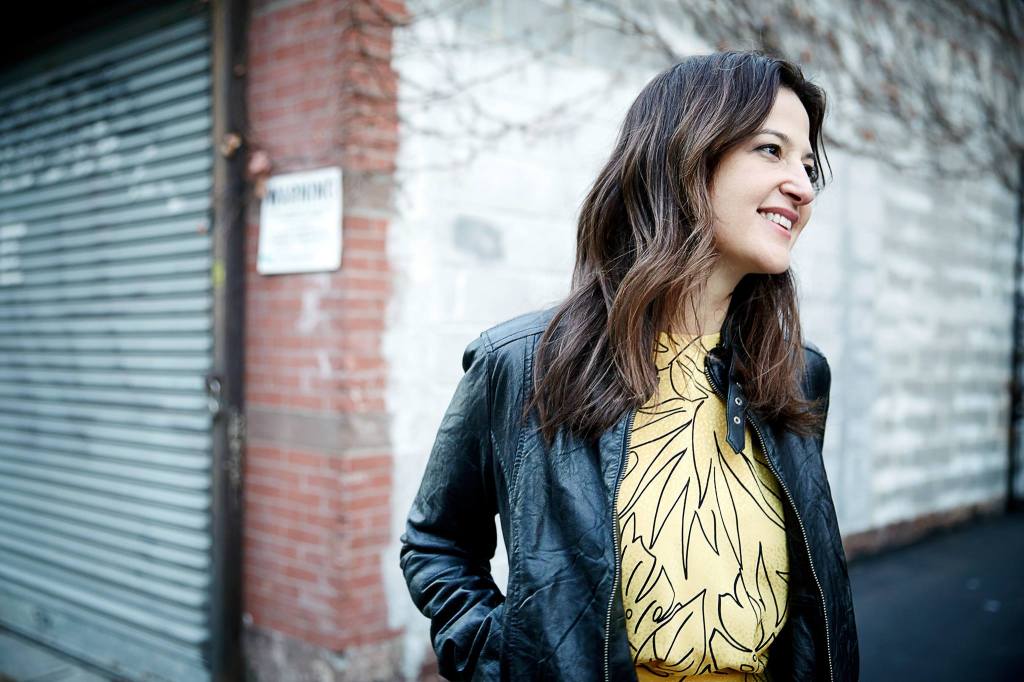 Kristin Andreassen traveled the world her previous projects Uncle Earl and Sometymes Why, but this year the Brooklyn artist embarked on the first headlining tour supporting her solo work. The tour is timed with the release of Gondolier (Amazon), Andreassen’s first solo album in six years, which similarly ventures into new territory than her prior work with its songs that cross throwback old time with more modern and adventuresome folk. Due out on February 17th, the album, stunning both lyrically and musically, features accompaniments by an all-star cast from New York’s bluegrass and folk scene, including Aoife O’Donovan and Ruth Ungar Merenda (Mike + Ruthy) on backing vocals, as well as Chris Eldridge & Paul Kowert (Punch Brothers), Jefferson Hamer, Alec Spiegelman and others in the backing band.

I caught up with Andreassen over the weekend to get the skinny on the new album and more.

You’ve had a bunch of great projects since your last solo album, but was there anything holding you back from putting out a follow up?

Great question. I think there are two answers. The simple one is Miles of Music Camp. I started this all-ages music camp five years ago, and while it’s been incredibly rewarding, it definitely took my focus away from my own music career. To be completely honest, If I’d known how much work it would be, I probably wouldn’t have done it! But now, the camp is doing well so I have some free time again, and it turns out that the people I met through camp are some of my biggest supporters in putting this new album out. Being a part of this community is now giving me lots of energy to create again, and in that sense I think I’ve spent this break exactly how I was meant to.

The second answer is a little more complicated and psychological. I’ve always loved writing and recording, but the truth is I’ve been ambivalent about promoting myself as a solo artist and band leader. My bands Uncle Earl and Sometymes Why ran their course around 2009, and while my first album was doing pretty well on the radio, I knew exactly how much work it is to launch a solo career and I just wasn’t sure that’s what I wanted.

Then Robin MacMillan came to me about two years back and convinced me that I was hoarding songs and I just needed to record and share them with people. He wanted me to do it for the sake of making art, with no specific timeline for releasing an album. That sounded easy enough, and we slowly created the core of these recordings. Eventually, I thought “Yeah, I would like to share this music with people. That would be fun.” That’s why I thank Robin more than anyone else involved in this project. He really helped me get past the question of “Why?” and instead just ask “What should it sound like?”

You wrote most of the songs for Gondolier on an island in New Hampshire’s Lake Winnipesaukee – the site for your annual Miles of Music Camp. Why’d you choose to make that your writing place?

So actually, it worked the other way around! First I was invited to this magical island for a writing retreat with about a dozen other songwriters from Boston (I had just moved from Boston to Brooklyn at the time). My dear friend Laura Cortese and I were both on that retreat, and as soon as we saw the island, we said, “this is where we should start a camp!”. So we did. But I still get to go to the same island each year for a week before Miles of Music Camp to write with these friends. We call ourselves the Sub Rosa Collective because initially we were all involved in a sort of underground open mic curated by the great songwriter Rose Polenzani. Session Americana’s Dinty Child was a part of that scene, and he also happens to be the off-season manager for the island, so he brought us all up there. I write there now because of peer pressure!

While there isn’t a title track on this album, you reference a gondolier on “The Boat Song” – a song that seems to be about destiny and navigating a world of choices to find the life we desire. Is that about right? Is that theme threaded throughout this album?

Um, yes. I think my dad is still wondering why I’m not a journalist. People who worked with me as a community economic development facilitator in Cape Breton are no doubt baffled that somehow I’m making my living as a singer-songwriter. And when I’m hustling the load-in after a long drive to some crazy gig, I’m definitely thinking about both of those alternate paths. Isn’t this true for most of us? Fate or choice could have brought us to a very different place.

That idea is all over this album for sure. “The Fish and The Sea” is about realizing what you have when you don’t have it anymore. “The New Ground” is about the sacrifices that are necessary for new opportunities to emerge. “Lookout” is about how time is the one true enemy army. Yeah, I think you hit on one of the central themes for these songs and, not surprisingly, for me as I was asking the question “How did I get here?!” (except The Talking Heads already nailed that song so I had to write different ones).

Many of those playing with you on the album are your closest friends in New York. What sort of impact does that have on a project with your name on it?

I just feel grateful and honored first that I have so many talented friends, and second that they would be willing to lend their skills to my songs.

What was it like having your boyfriend, Chris “Critter” Eldridge, perform on and serve as executive producer of this album?

This album wouldn’t be what it is without Critter’s work. He didn’t have an official title till the moment I was typing the liner notes and I realized he’d put in as many hours as any of us. He heard every rough mix and, in addition to playing guitar on several songs, he also played the critical role of telling me when the recording was done and when it wasn’t. When you start a recording project that’s as open-ended as this one was, it can be very hard to find the end! So Critter had important suggestions all along the way, from tiny details (he edited several tracks on his laptop while on the bus with Punch Brothers) to the biggest picture of choosing which songs should go on the record and which to leave behind. I’m beyond grateful.

The other person that can’t go without mentioning is Lawson White, who produced and played drums on “The New Ground”, “Some Do” and “‘Simmon”. I brought Lawson in to finish these three songs last spring when Robin got especially busy with other projects. I couldn’t have called anyone better, and Lawson just poured his soul into these tracks. He’s got incredible ears and so much soul. He really seemed to get the music and I couldn’t have finished the album without him.

Also, Alec Spiegelman! His woodwind arrangements add a layer of spice to your live performances that are pretty hard to replicate without Alec Spiegelman. Are you taking that kid on the road? Who else is hitting the road with you?

Alec arranged these gorgeous trio parts for bass clarinet, clarinet and flute. He’s a totally brilliant musician and  ton of fun to play with live so yeah, he’s playing with me as much as he can! We just got back from this crazy radio tour playing Mountain Stage, Woodsongs, Music City Roots and a few more shows as a quartet with Alec filling the bass role with the clarinet and also Jefferson Hamer (guitar and harmony vocals) and Rosie Newton (fiddle and harmony vocals). That band is both rocking and pretty unusual in its instrumentation.

For these official CD Release shows coming up (Northampton, Boston, NYC) I’ll bring the full album band which includes Jacob Silver (bass) and Robin MacMillan (drums) plus Alec, Jefferson and some chicks on the harmony vocals. Aoife will sing in NYC. Ellie Buckland, Isa Burke and Mali Obomsawin (three awesome ladies I met when they were campers at Miles of Music) will sing in Boston and open the show with their new band The Wiles.

In April, I’m touring on the west coast as a duo both with Chris Eldridge and with Jon Neufeld (of the band Black Prairie). Planning a Colorado tour in May with my old Uncle Earl bandmate and friend KC Groves on bass!

I’m working on the summer now. It’ll include some fun festivals with various combinations of the above cast. (Got a gig for us? Gimme a ring!).

How long do we have to wait for the next one?

Check out Andreassen’s calendar for tour dates, including a number of Concert Window shows. One unlisted here is her House of Love show in Red Hook, Brooklyn. For a taste of her live performances, here are a few vids of a session I caught in the Pewter House at last year’s Summer Hoot.