On July 23rd, Chapel Hill-based stringband Mipso makes its way back to Brooklyn (and the internets) for the first ever grass clippings garden session – an unamplified concert for a small group in my tiny, vine-enclosed backyard in Park Slope that is simultaneously broadcast live on the web via the good folks at Concert Window. The night will be hosted by gcb mascot, Banjo. (Take that, Bob Boilen!) 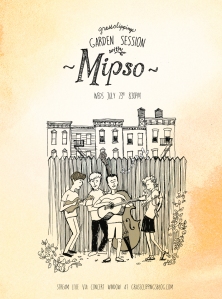 With Concert Window, you pay what you want to watch live and 70% goes to the band (gcb takes none btw). You can request songs, tip the band, anonymously ask bassist Wood Robinson to take his shirt off or say things like, “damn, that’s some sweet singing, y’all.”

Last year Mipso released  Dark Holler Pop – an album that debuted at #8 on Billboard’s bluegrass chart and was one of our favorites released late last year. The album includes “Redeye to Raleigh” (below), which made our top songs of the year list. We hosted a Mipso show at Rockwood earlier this year and are pretty stoked that they are kicking off the garden sessions. Note that fiddler Libby Rodenbough is now touring with the band full time and will join us in the garden.

Mark your calendars for this show and check out the band’s full tour schedule here, including at show at Rockwood on Friday, July 25th. More garden sessions on the way!

In person attendance is invitation only due to a tight, tight space.