As if there are enough decisions to be made about which stage to watch at one festival, I’m now torn between two festivals.

Last year I hit the Newport Folk Festival and had an amazing time. The lineup was great…good discovery…good crossover…loads of hipster fashion. The lineup in Newport this year is amazing (see link below). Gillian, Emmylou, JTE, The Decemberists, Delta Spirit, David Wax Museum (again!) and more goods. 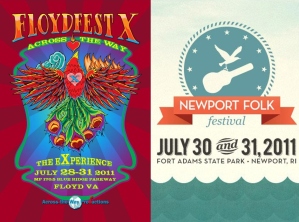 This year I was thinking about trying something different and was shocked to see how good the lineup is in Floyd: Old Crow, Taj Mahal, Xavier Rudd, David Grisman, Dirk Powell, The Red Stick Ramblers and more.

BUT – they are the same weekend. The Carolina Chocolate Drops are hitting both, but I don’t think I could pull that off (unless they want a blogger to ride with them – guys? eh, eh?).

Floyd is camping. Newport is B&B or hefty commute each day. Newport is closer (to civilization and my current location). Floyd is an escape and a true Americana environment. Festivarians in Floyd will jam with you. Festivarians in Newport are too cool for school. Floyd is North Face & Carhartt. Newport is $200 (rolled) jeans. Floyd takes its time, so it’s four days. Newport wraps it up in two (unless you hit the Friday night stuff).

I’m pretty set on going to one or the other. Which one? Please advise.  I’ll cover both, but will have some REALLY good coverage of one.

Error: Twitter did not respond. Please wait a few minutes and refresh this page.